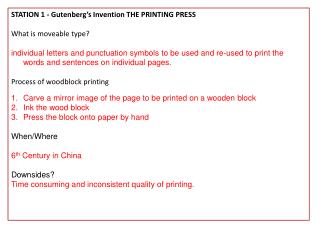 STATION 1 - Gutenberg’s Invention THE PRINTING PRESS What is moveable type?

STATION 1 - Gutenberg’s Invention THE PRINTING PRESS What is moveable type? individual letters and punctuation symbols to be used and re-used to print the words and sentences on individual pages. Process of woodblock printing Carve a mirror image of the page to be printed on a wooden block

STATION 1 - Gutenberg’s Invention THE PRINTING PRESS What is moveable type?

How to Impress the Press & Generate Media Coverage for Your Startup - Learn how to put together a stellar press kit,

Inventions - . riddle of the day. answer:. what goes around the world but stays in a corner?. a stamp. inventions. what