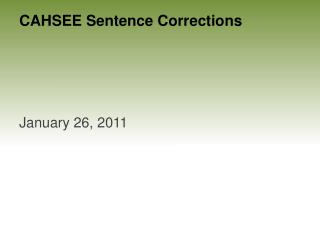 Sentence Corrections - . technical writing class. cost estimates are a technical document that is very important to our

CAHSEE - Math flow chart. if you have completed 1 semester of algebra 1 prior to your enrollment at chs then you will

CAHSEE Academy - . moreno valley high school january 2014. one of the requirements to earn your diploma is passing the

CAHSEE INTERVENTION - . the impact of the valenzuela settlement. background. in place for three years: cahsee

Cahsee Literary Terms - . literal language. the literal meaning of a word is its dictionary definition. for example: a

WELCOME TO CAHSEE - . week five. notes- any slide with a green title should be written down in your notebook. lesson #9-