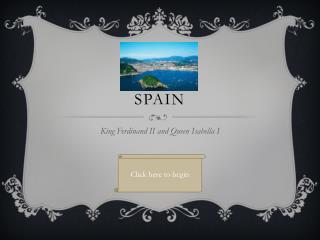 Spain. King Ferdinand II and Queen Isabella I. Click here to begin. Ferdinand II. Ferdinand was born in 1452, and died in 1516 King of Aragon and Castile in joint rule with Isabella I

The Vikings of Spain - People re-enact viking raids of the past in catoira,

Andalusia (Spain), - . the culture heritage, and some of its roots. photographed by jair (yair) moreshet, february 2005.

Round 1 - . general knowledge. 1. what is the capital city of spain?. 2. complete this phrase from terminator 2 “ hasta

Barcelona, Spain, May 4 – 7, 2008 - Extraction of maleic acid and phthalic acid by scco 2 saturated with trioctylamine

Our “ Sphere of Influence ” - . the treaty of paris: 1898. cuba was freed from spanish rule. spain gave up puerto

My country: - . spain. geographic situation. spain is located in the iberian peninsula, in the southwest of europe. it

The Monarchs of Europe - . the power of spain. 1. the king becomes emperor. charles v and the empire 1516, became charles

The Age of Absolute Monarchs - . spain, france, england, and russia. the golden age of spain. the hapsburg rulers of

Age of Absolutism Spain - . the ottoman empire. 1. the pressure the ottomans exerted on europe was enormous. most of the

FRANCE, GERMANY, ITALY &amp; SPAIN: ‘‘The profile and behaviour of SME’s which use the Internet for - Es’’.