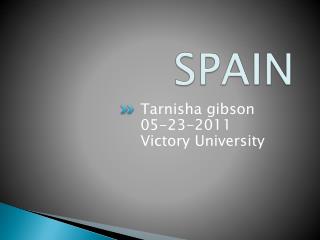 Educational Tours to Spain | Book Online - Rocknroll adventures offer many options to the student traveling to spain. we

SPAIN - . a place to visit and a place to enjoy!!. our flag:. the flag of spain is formed by three horizontal stripes the

Spain on a map of Europe - . geography of spain. the iberian peninsula is located in south west europe. it includes the