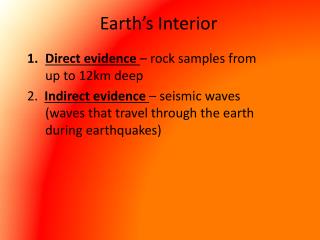 Inside the Earth - . this drilling ship samples sediment and rock from the deep ocean floor. it can only sample materials

Mapping the Earth’s Interior - Seismic waves. just like doctors use an mri, ct scan, or an x-ray to see inside our

Earth’s Interior - . c4s1. exploring inside of earth. how have geologists learned about earth’s inner structure?.

Structure of the Earth’s Interior - . do you really believe? ? ?. all the planets of the solar system came out of the

Differentiated earth - . earth. size main characteristics of the surface and interior. statistics about the earth. shape

Reflection on Earth’s interior - . first by yourself, and then with your table, consider 1, 2 or all 3 of the following