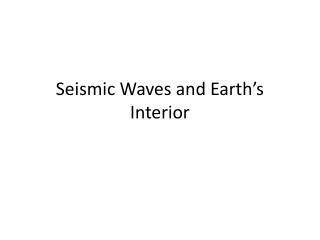 Seismic Waves and Earth’s Interior. Forces Within Earth. P-waves and S-waves, also called body waves, pass through Earth’s interior. The focus is the point underground where the rock actually breaks. The epicenter of an earthquake is on Earth’s surface directly above the focus . Seismic waves and seismic rays - . a wave front is a surface connecting all points of equal travel time from the source.

Seismic Waves - . wave motion is perhaps most familiar to us from our observations of waves on water. when a stone is

Engineering &amp; Waves: Seismic Waves - . engineering waves overview. in this lesson, we will learn about: what are

Earthquakes and Seismic Waves - . objectives. how does the energy of an earthquake travel through earth? what are the

Earthquakes and Seismic Waves - . c5s2. earthquake. is the shaking that results from the sudden movement of rock along a

Surface and Seismic Waves - . surface waves. travels along a surface (duh!) separating two media bobber will not move out

Seismic Rays and The Interior of the Earth - . dusty wilson tina ostrander eric baer with lots of great help from logan

Seismic Waves - . michael. nick. by:. aaron. what is a seismic wave?. waves that originate from collision of 2 tectonic