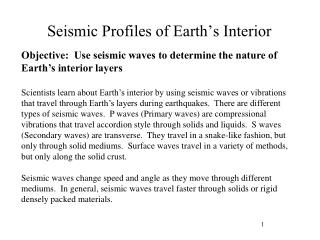 The Interior of the Earth - . by crystal mason. the layers of the earth. the

EARTH`S LAYERS - . inner core the inner core is solid because of all the heat and pressure. mantle the mantle is molten

INTERIOR OF THE EARTH - . the earth comprises three layers the crust the mantle the core. it is the lightest and upper

Earth and its interior - . by: ross osborne. volcanoes/earthquakes. volcanoes are caused by convergent boundaries in the

The Interior of the Earth - . what exactly is in there?. of course we do not know for certain, but we are pretty sure the

Seismic Rays and The Interior of the Earth - . dusty wilson tina ostrander eric baer with lots of great help from logan