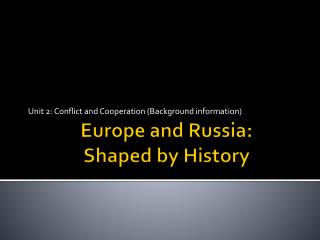 Europe and Russia: Shaped by History Europe and Russia: Shaped by History

Mathematical Ideas that Shaped the World - . non-euclidean geometry. plan for this class . who was euclid? what did he

The Amish - . history beliefs conflicts and problems. history. during the reformation in 16th century europe, luther and