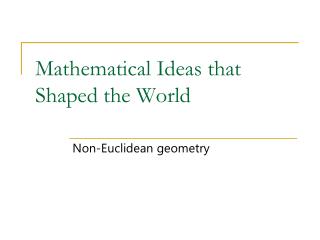 Mathematical Ideas that Shaped the World Mathematical Ideas that Shaped the World. Non-Euclidean geometry. Plan for this class . Who was Euclid? What did he do? Find out how your teachers lied to you Can parallel lines ever meet? Why did the answer to this question change the philosophy of centuries?

Mathematical Ideas that Shaped the World

Enough Mathematical Appetizers! - . let us look at something more interesting: algorithms. algorithms. what is an

Overall Outcomes - Ccss-m in the classroom: grades 3-5 number and operations fractions weaving content and standards for

Sumerian Achievements - . the invention of writing. the sumerians developed cuneiform ( kyoo-nee-uh-fohrm ), the

Singapore Math Computation Strategies - . june 2012 “ understanding is a measure of the quality and quantity of

Entrepreneurship for MBA Students - . proving the business concept lecture 4. introduction. the world of possibilities is

J-Shaped Distributions - . robert m. hayes 2004. overview. viewing distributions of use descriptive rather than

Effective Mathematics Instruction: The Role of Mathematical Tasks* - . *based on research that undergirds the cases found