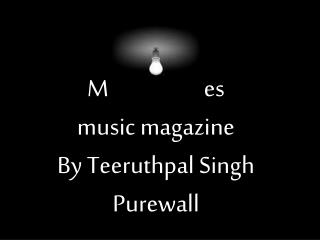 MEDIA STUDIES: MAGAZINE ANALYSIS - This is a cover of one of the magazines which nme (new musical express) have produced

Music Magazine - . analysis. masthead: the masthead is bright yellow, making it stand out. if the magazine was on a stand

Music magazine - . amy morgan. nme. nme had been published weekly since 1952. it focuses on punk rock and indie bands.

Music magazine planning - . the powerpoint. the

Music Magazine Pitch - . by rachel pitcher. i chose to have indie-rock as my genre. it’s a type of music which i really

Music Magazine Ideas - . by adam dent. genre . my music magazine will cover the genre of rock, focussing mainly on

Music Magazine covers - . by chris clark. 1 st cover. the masked text of ‘kerrang’ is shown to be shattered, given