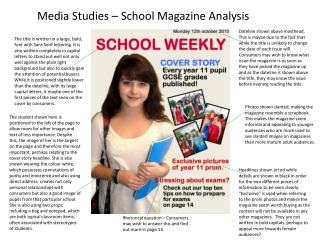 Evaluation of my music magazine - . how my magazine, uses develop, challenge forms and conventions of real media

Kerrang! Magazine cover analysis - . layout. the centre of the cover features the subject of the main article in the

Analysis ON Music Magazine’s Covers - . by elena agadzhanova. rock sound. a deal inside of the magazine, which the

Media Studies Evaluation - . daniel drakes eye for an eye. 1. in what ways does your media product use, develop or

Media Studies Summer Work/ Cover Analysis - . by harry andrew clarke . what should every cover try to include?.