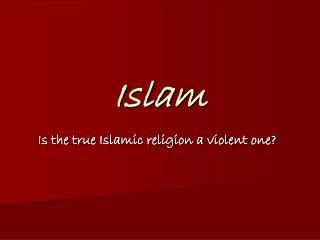 Islam. Is the true Islamic religion a violent one?. Background Information. The ultimate goal for every Muslim is “Islam” the state of peace, of submission in the certainty and power of Allah Islam and Buddhism - . an economic and defensive alliance of the free towns in northern europe founded about 1241 and