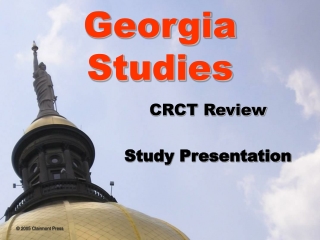 Matter CRCT Review - . which of the following statements describe elements?. all of the particles in the element are

CRCT Review - . what was prince henry’s role in european exploration?. he established a school of navigation and

CRCT Review - . week 1 instructions: write the correct answer on your paper. do not talk. keep paper for our next review

CRCT Language Arts Review - . 1. which verb or verb phrase correctly completes the sentence?. the pilots at the air show

CRCT - . review questions. 1. 1. which metric unit would you use to measure the mass of an object? a. meters b. grams c.

Estimating the 2% - . what is the crct-m?. the crct-m is a grade-level alternate assessment designed for eligible

Mr. Edgeworth’s Enormous CRCT Language Arts Review - . (just do it!!!). prepositions. a preposition is a word that

CRCT/Test Taking Strategies - . ashley jimerson lisa hendrix. how do i better understand and help my students prepare for