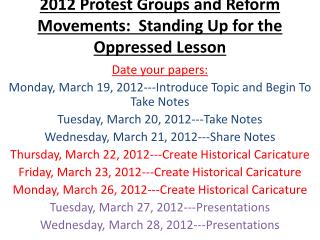 2012 Protest Groups and Reform Movements: Standing Up for the Oppressed Lesson 2012 Protest Groups and Reform Movements: Standing Up for the Oppressed Lesson

Standing Strong in the Battle for Truth - . “truth is relative. there are no absolutes. truth is what you make it.” .