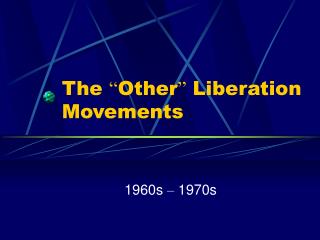 The “ Other ” Liberation Movements The “ Other ” Liberation Movements. 1960s – 1970s. The Two Major Movements of the 50s – 60s. Anti-War Protestors with the Vietnam Conflict Civil Rights and its off-shoots. An Era of Activism. The Women ’ s Movement Ethnic Minorities Seek Equality The Counterculture

The “ Other ” Liberation Movements

A Look at Nineteenth- and Twentieth-Century Art and Movements - . appreciating the “impulse from a vernal wood”.

Extra Ocular Movements - . (aka) …and you thought hyperopia was bad…. what are we going to do t’day?. some ( very,

Unit 3 Rocks, Soil, Erosion and Mass Movements - . including the geological history of north carolina!. classification of

PASSIVE MOVEMENT - . passive movement. these movements are produced by an external force during muscular inactivity or

2. Of the various types of mass movements, which is the slowest acting? A. rock slides B. debris flows C. slump D. cree