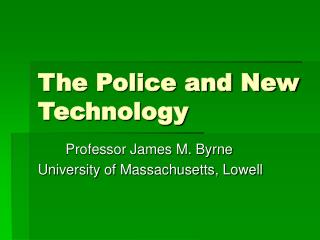 The Police and New Technology

The Police and New Technology. Professor James M. Byrne University of Massachusetts, Lowell. Changes in the Size of Police and in Police Personnel. Among large city police departments, 1990-2000, changes included --

The Police and New Technology

Vote 25: department of police - . briefing to the portfolio committee on police budget vote hearings 29 to 31 march 2011.

A Career as a…. Police Officer - . by: heather milas. why a police officer?. good money exciting close jobs a lot of

How Does Police Interrogation Work ? - . getting someone to confess to a crime is not a simple task, and the fact that

Police Patrol - . management question: how do you most effectively allocate police personnel? answered with the tools of

Police Response to Juveniles in Crisis - . a *collaborative approach and training august 2009 *police/corrections/mental