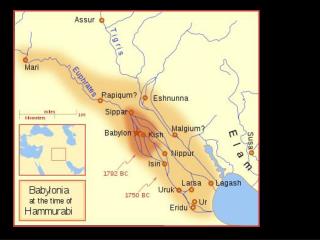 Babylon – Present day Al Hillah, Iraq 62 miles south of Baghdad. In 1985 Saddam Hussein started building on top of the ruins of ancient Babylon. He signed his name on the bricks, and wrote this;. "This was built by Saddam Hussein, son of Nebuchadnezzar, to glorify Iraq". Chesapeake Bay - . chesapeake bay. formed by the drowning of the susquehanna river when sea levels rose after the last

Babylon, oh Babylon, We Bid Thee Farewell - . zion. d&amp;c 45 66 and it shall be called the new jerusalem, a land of