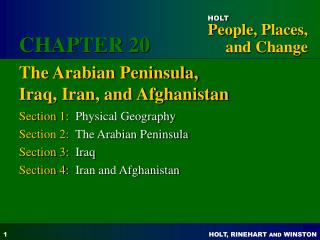 Iran, Iraq, and Afghanistan - . the shahs of iran. 1925-iran’s first shah made many changes to modernize iran many

Arabian Peninsula - . chapter 23 section 4. i can explain how the discovery of oil changed the arabian peninsula. i can

Iran and Iraq - Hwh unit 13 chapter 20.3. iran and iraq. not an arab state iranians are persian and speak farci the

Iran and Iraq - . the iranian revolution. with mohammad reza (shah) back in power in iran, the united states and other

Iran/Iraq - . a brief history. sunnis. sunnis : muslims who claim the majority in the world islamic community . the term

Geography of the Arabian Peninsula

Chapter 23 Arabian Peninsula - . sections 4 and 5. oil changes a region. before the discovery of oil, the countries of