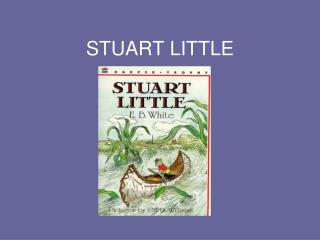 STUART LITTLE. Chapter 1 In The Drain. The Little family (Mr.Little, Mrs. Little and their son George) have a new baby named Stuart. Stuart is the main character of the book. When Stuart is born the Little family is surprised that he is very small and looks like a mouse.

Stuart Little - . read this book and you will be speechless when you see stuart and his adventures on sea and land. by

Stuart Davis - . by braden migliaccio. stuart davis was born in philadelphia in 1894. he grew up in an artistic

The Stuart - . in english history. the index. the origins the importance the monarchs james i charles i oliver