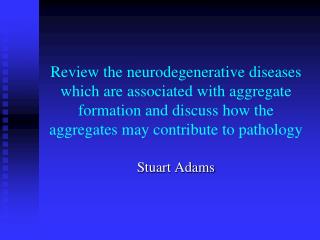 Review the neurodegenerative diseases which are associated with aggregate formation and discuss how the aggregates may contribute to pathology. Stuart Adams. Trinucleotide Repeat Disorders. Two broad groups of TRD’s. Henry Adams - . a teacher affects eternity: he can never tell where his influence stops. marcus tullius cicero. what

John Adams - . “ the revolution was in the minds of people…before a drop of blood was shed at lexington.” -john

Abigale Adams - . abigale adams was born in weymouth, massachusetts during a blizzard. she was born on november 11 th ,