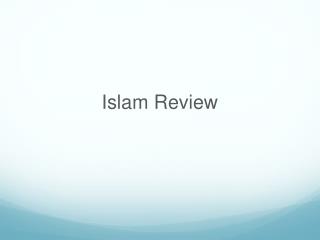 Chapter 10 Islam - . sufism the spread of islam relationships with the west muslim resurgence. pre-islamic arabia the

Islam Test Review - . four corners: stand at the correct letter be ready to defend your answer. 1. islam is. submission

The 5 Pillars of Islam - . class 6. the five pillars. muslims obey five pillars as an outward sign of their belief. the

Chapter 7: History of the Islamic World - . review game. question 1:. why do geographers call arabia a “crossroads”

The Spread Of Islam - . chapter 10 section 2 page 238. a review-. what is the difference between islam and muslim? islam