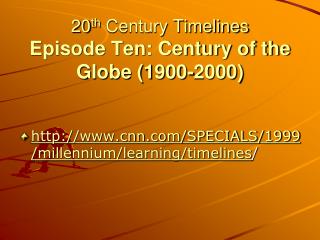 20 th Century Timelines Episode Ten: Century of the Globe (1900-2000). http://www.cnn.com/SPECIALS/1999/millennium/learning/timelines /. The Shape of the Twentieth Century The history of the twentieth century can be summarized--excessively briefly--in five propositions: ERGONOMICS FOR THE 21 ST CENTURY - . office of risk management loss prevention unit. pre-test. what is ergonomics ? what