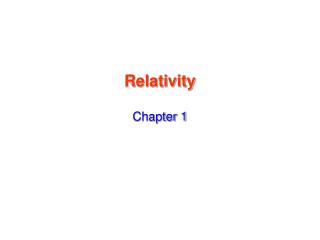 Relativity Chapter 1 - . modern physics is the study of the two great revolutions in physics - relativity and quantum

Relativity 1 - Harrison b. prosper florida state university young scholars program. relativity 1. where do we come from?

Relativity 1 - Harrison b. prosper florida state university ysp 2012. relativity 1. where do we come from? what are

Chapter 1. The principle of relativity - . section 1. velocity of propagation of interaction. to describe processes, we

Chapter 37. Relativity - . newton’s laws and maxwell’s equations describe the motion of charged particles and the

Relativity - . historical development. 1600s newton discovered his laws of mechanics applied to a wide variety of