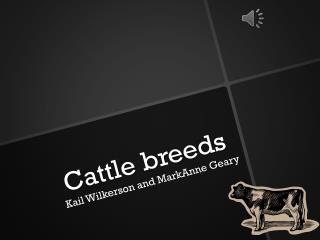 Cattle breeds . Kail Wilkerson and MarkAnne Geary. Angus is a beef breed. They came from Scotland. Ranchers like them in the snowy places because they have black bags so they don’t get burnt. Angus cattle . Beefalo is a cross breed of a buffalo and a beef cattle

Horse Breeds - . spring 2006 m. marler. horses breeds can be classified by…. the way the horse is ridden. (tennessee

Sheep and Goat Industry - . animal science level 2. unit map: follow along in your packet. what are you learning?

Agriscience Unit 13 Worksheet - . 1. the most popular breed of light horses in the united states is the:. 2. a breed of

Dairy Cattle - . introduction. unit map: follow along in your packet. what are you learning? as.06.02 basic: recognize,