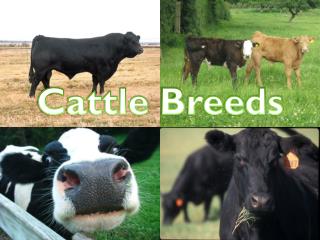 RANCHING AND FARMING - . by c assie , brenna ,and amara. cattle. cattle is a cow . there are lots of different breeds of

Chapter 3 – The Beef Industry - . objectives of the chapter : how beef has influenced the american diet location of the

_____ - . products from cattle factory farming and transport of living animals cattle breeds in austria bse and the ama

Breeds of Beef Cattle - . an excellent resource is http://www.ansi.okstate.edu/breeds exhibiting 258 breeds (use google,

The Cattle Kingdom - . section 3 chapter 18. focus questions. what led to the cattle boom? what was life like for

Breeds of Dairy Cattle - . an excellent resource is http://www.ansi.okstate.edu/breeds exhibiting 11 breeds (use google,

Beef Cattle Breeds - . by: erin bosch topic 3082a, b. development of breeds. many breeds originated in europe selection