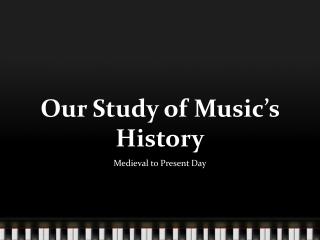 Our Study of Music’s History

Our Study of Music’s History. Medieval to Present Day. Musical Time Periods. Musical time periods are not very exact, or defined. They were developed by people who lived long after that time period.

Our Study of Music’s History

Philosophy of Music - . navar amici. philosophy of music is the study of “fundamental questions about the nature of

LET’S MUSIC ! !! - . a different way of learning english. introduction. are you tired of repeating structures and doing

Introduction to the Social and Cultural Study of Music Javanese Gamelan - . week 3. javanese

Music Exploratory - . come in quietly get a chair copy your homework into your agenda homework – make four flashcards

WHat is Music? - A complex amalgam of melody, harmony, rhythm, timbre and silence in a particular (intended) structure (

Music, Culture, and History - . by the darwinians: kyla, sophia, adam and cody. objectives. module #4: language and

HISTORY OF MUSIC AND ITS FUNCTION IN THE OLD TESTAMENT Willie Alvarenga - . overview of our lesson. a call to search the

What is history? - . everything that happens is a part of history. (we will discuss the major stuff). what do we call the