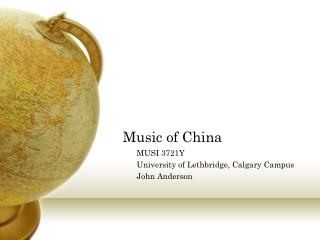 Music of China - . lesson 1. we are learning about. chinese music and culture. in this lesson we will. talk about the

Music from China - . jenn cartier alissa jones. china. china is the fourth largest country in the world. the great wall

Music in China Interactive quiz - . instruction. complet e answering the question index by clicking the number. if your

Unit 3: Music from China &amp; Japan - . http://www.youtube.com/watch?v=chwadnofdng. where are we going?.  you are

Music Of America - . by joshua. index. where have all the flowers gone ? by pete seeker blowin, in the wind by bob dylan

History of Music - . baroque and classical. baroque 1600-1750. at the end of the 16 th century, madrigal composers moved