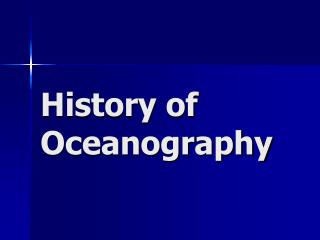 History of Oceanography. Why study historic oceanography? . Connected to the world’s overall history Commerce, warfare, resources, weather The oceans have shaped humanity’s past. Why study Oceanographic History?. Understand how and why people apply marine sciences today

The History of Dengue Research before 1950 A Forgotten History ? - . early dengue investigation in the shadow of yellow