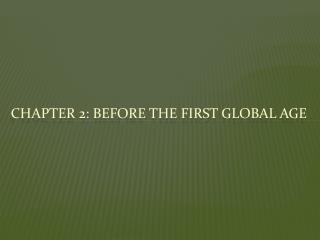 Chapter 2: Before the First global age

Chapter 2: Before the First global age . Section 1. The first civilizations of the americas. Geologist believe the first people to come to the Americas, they did so using a land bridge made of glaciers. Glaciers- Thick sheets of ice Hunters following large animal herds

Chapter 2: Before the First global age

Unit I: The First Global Age - . age of absolutism. b . absolute or limited monarchy?. 1. many nations in europe (and

The Beginnings of our Global Age - . chapter 14. moluccas – an island chain in present-day indonesia; chief source of

CHAPTER 15 – GLOBAL AGE sec. 1: conquest in the Americas - What was happening in north and south america what was

Chapter 2 Section 1: Age of Exploration, pgs. 36-41 - . eq : what were the causes and effects of european exploration of

Unit II: Muslim Empires in the First Global Age - . geography. -“cross-roads” of the world -“middle” only to