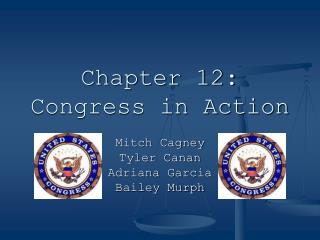 Chapter 12: Congress in Action. Mitch Cagney Tyler Canan Adriana Garcia Bailey Murph. Congress Organizes: Opening Day in the House. Every other January, the 435 men and women who have been elected to the House come together at the Capitol to begin a new term.

Chapter 6 Proteins in Action - . 1. hemoglobin is a multisubunit allosteric protein that carries o2 in erythrocyte. 1.1