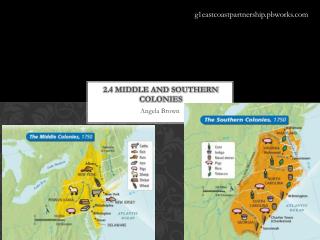 g1eastcoastpartnership.pbworks.com. 2.4 Middle and Southern Colonies. Angela Brown. Focus…. Learning Targets :. Vocabulary:. I Can… Explain the early history of the Dutch in New York. Describe the founding of the other Middle Colonies.

DISCOVERY OF AMERICA TO 1763: THE AMERICAN COLONIES - . what were some of the common characteristics of the natives when

DISCOVERY OF AMERICA TO 1763: THE AMERICAN COLONIES - . what were some of the common characteristics of the natives when

Describe the geography and climate of the Middle Colonies. Describe the early history of New York and New Jersey.

COMMEDIA DELL’ARTE - . the historical background italy in the high-middle ages. being the core of the mighty roman