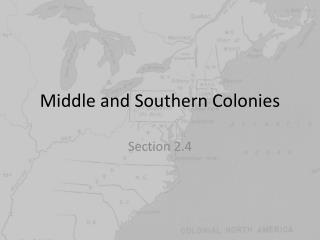 Middle and Southern Colonies. Section 2.4. Main Idea. Events in England during and after the English Civil War led to a new wave of colonization along the Atlantic coast south of New England. New Era of Colonization. England was gripped by a civil war during the 1640s. Southern Culture in the 1930s - Common foods. many of the notable origins of southern-style cooking come from african,