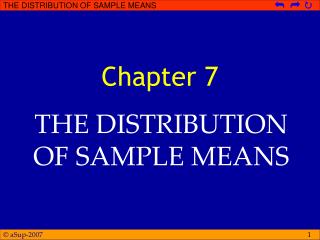 Chapter 7. THE DISTRIBUTION OF SAMPLE MEANS. Imagine an urn filled with balls…. Two-third of the balls are one color, and the remaining one-third are a second color One individual select 5 balls from the urn and finds that 4 are red and 1 is white