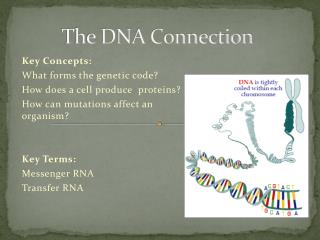 The DNA Connection. Key Concepts: What forms the genetic code? How does a cell produce proteins? How can mutations affect an organism? Key Terms: Messenger RNA Transfer RNA. The Genetic Code. Main function of genes is to control the production of proteins Genes and DNA: Chromosomes The DNA Connection - . chromosomes are made of dna. the dna code. each chromosome contains thousands of genes. the

The DNA Connection - . genes. main function of genes are the production of proteins in an organisms cells proteins help

Daily TAKS Connection: DNA - . bio(6): the student knows that the structures and functions of nucleic acids in the

Daily TAKS Connection: Changes in DNA - . bio(6): the student knows that the structures and functions of nucleic acids in

The American Connection - In 1982, two americans (tom and susan) came to spend a year in paris. chloe welcomed

The Love Connection - . on-line dating and friendship sites. topics we explored. 1. identity: what characteristics do the

The Amsterdam Connection - . chapter 1 at the

The User Connection - Input and output. the user connection. brain teaser…. draw nine points on a piece of paper (see

What’ the connection? - . tourism. learning objective – to study the growth of the tourist industry, learning

MAKE THE CONNECTION - . connect with your customers like never before. ip office applications workshops: call recording.

The Ideological Connection: - . party ideologies &amp; what they stand (or stood) for. reminders:. paper topics due

“The Prayer Connection” - . 1- how many hours would we be willing to pray if we knew it would save a soul ?. 2

The Rainbow Connection - . why are there so many songs about rainbows and what's on the other side ? rainbows are