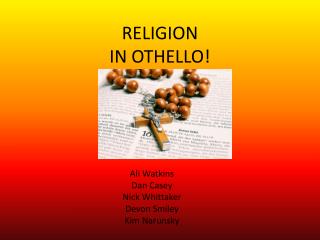 RELIGION IN OTHELLO!. Ali Watkins Dan Casey Nick Whittaker Devon Smiley Kim Narunsky. What was the religious setting in Shakespeare’s time(16 th century)?. ?. A lot of religious tension between Protestants and Catholics. Many Protestants were forcing Catholics to convert. Vs.

Othello - . a brief introduction. story. the story focuses on the eponymous character, othello, a black man and

OTHELLO - . how have composers interpreted the key values, ideas and attitudes of the characters in shakespeare’s

Othello Background Notes - . wlc, ferencz. plot. othello is a moor and the general of the venetian army othello and

Othello - . iago. iago is one of the first true villains ever written as a mortal man. previous villains were typically

OTHELLO - Revision. othello . vital things to remember:. you have to write one essay. you have a choice of three

OTHELLO - . shakespeare script, stage and screen by bevington , welsh and greenwald. othello is unique among

Othello - . by william shakespeare. the moor of venice. written in 1603. set in venice and cypress. venice . cyprus. the