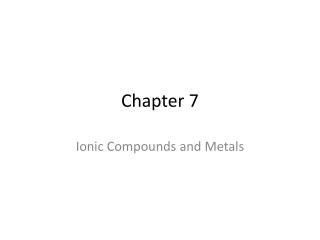 Chapter 7. Ionic Compounds and Metals. National Standards for Chapter 7. UCP.1 – Systems, order, and organization UCP.2 – Evidence, models, and explanation A.1 –Abilities necessary to do scientific inquiry B-1 – Structure of atoms B-2 – Structure and properties of matter