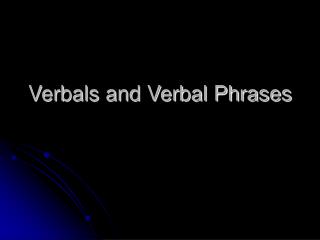 Verbals and Verbal Phrases. A verbal is a verb that acts as a noun, adjective, or adverb. The three kinds of verbals are: gerunds, participles, and infinitives. What is a Verbal. A gerund is a verb acting as a noun. To form a gerund add “ing” to the end of a verb. VERBALS AND VERBAL PHRASES - . the participle. a verbal is a word that is formed from a verb but is used in a sentence as

Verbals and Verbal Phrases - . ela8c1f—the student analyzes the structure of a sentence ( basic sentence parts ). what

PHRASES AND VERBALS - . appositives, infinitive and prepositional phrases. appositive. an appositive is a noun or pronoun

Verbal Phrases: Participle Phrases - . participle: a form of a verb, acting as an adjective. verbal phrases. when a verb

Verbals, Gerunds and Gerund Phrases - . 8 th grade ela. verbals and gerunds. a verbal is a word that has a verb form but

Writing with Verbal Phrases - . having fun yet?. why care?. verbals will add variety and panache to your sentences people

VERBAL PHRASES OF “PUT” - . put away. to set aside; to return something to its proper place to put away

Verbal Phrases Involving Addition - . the algebraic expression a + b can be used to represent several different verbal

Translating Verbal Phrases into Algebraic Expressions - Aim: how do we continue to translate an english phrase into an

Verbals - . verbals are words that look like verbs, but act like something else (nouns, adjectives, or adverbs). three

Verbals - . verbals are verb forms that act as some other part of speech. there are 3 types: infinitive – to + verb to

Verbals - . intro to literature. verbals. forms of verbs used as nouns, adjectives, or adverbs. they may be modified by

Verbals : - . take a closer look… they are not verbs… verbals are imposter verbs!!. what are verbals ?. verbals are

Verbals - . participles, gerunds, infinitives. what is a verbal?. a verbal is a verb functioning as some other part of

Verbals - . verbals are verb forms that are being used as other parts of speech. they are not expressing the actions of