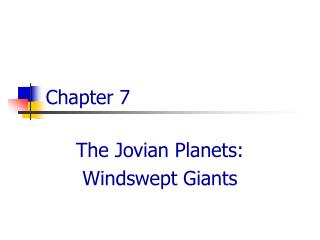 Chapter 7. The Jovian Planets: Windswept Giants. Introduction. J upiter, Saturn, Uranus, and Neptune are giant planets ; they are also called the jovian planets . They are much bigger, more massive, and less dense than the inner, terrestrial planets.