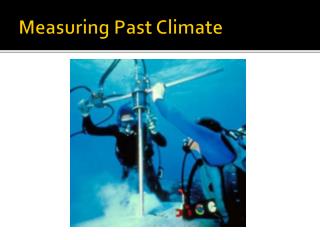 Measuring Past Climate. How do we measure the earth’s temperature from the past?. Instruments record the past 140 years. Historic records go back thousands of years. Climate Change Implications in BC - . assessing past, current and future fire occurrence and fire severity in bc.

Chapter 20 - . climate change and ozone depletion. chapter overview questions. how have the earth’s temperature and

MBA/MFM 253 Measuring Return on Investment - . the last 2 chapters discussed measuring the cost of capital – the

WELCOME TO - . measuring purchasing performance this is a most useful module as it highlights the benefits of procurement