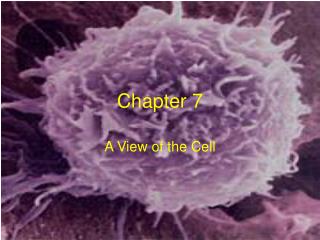 Chapter 7. A View of the Cell. Cell Theory. CD-ROM Before microscopes, people thought diseases were caused by curses and supernatural spirits They had no idea microorganisms, such as bacteria and viruses existed When the microscope was invented, scientists discovered cells exist

PLASMA MEMBRANES - . every cell has a cell membrane. functions of the plasma membrane. regulates the passage of materials

A Cell is like a Factory - . task 1. glue the cell/factory chart into your journal. how can a cell be like a factory???.