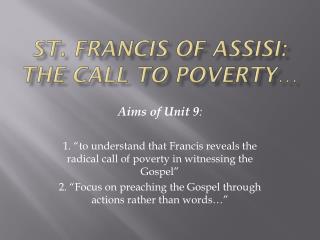 St. Francis of Assisi: The Call to Poverty… St. Francis of Assisi: The Call to Poverty…. Aims of Unit 9 : 1. “to understand that Francis reveals the radical call of poverty in witnessing the Gospel” 2. “Focus on preaching the Gospel through actions rather than words…” .

St. Francis of Assisi: The Call to Poverty…

Review of Explorers - . ninety percent of these explorers are on your exam. you need to know the highlighted part for

Impact of Poverty on Education - Marcia melton edci 6300 summer, 2007 introduction the united states has about 74.5