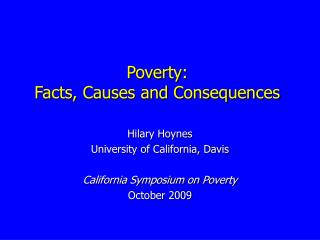 Poverty: Facts, Causes and Consequences Hilary Hoynes University of California, Davis California Symposium on Poverty October 2009 In 2008, more than 1 in 6 children lived in poverty and 13.2 percent of all persons were poor. These numbers are expected to be higher in 2009.

Let’s test our knowledge of basic facts about poverty in the United States. Let’s take the: - War on poverty quiz!.

Poverty - . chapter 9, section 3. what is it?. poverty= standard of living that is below the minimum level considered

Solutions to Poverty? - . cgw4u. african debt. why are many african countries so deeply in debt? what is the impact of

FACES OF POVERTY: THE WORKING POOR - . agenda. define “working poor” overview of the wdc profile of the working poor

Teaching with Poverty: The Impact and Strategies - . by: matt bergman. about me. @ mattbergman14.

Students of Poverty - . elise kechele educ 709 spring, 2014. what is your definition of poverty?. poverty is…. the

Poverty, disability, and the power of the “welfare queen” Observations of a poverty lawyer-turned-policy advocate

A Capability Approach to Fight Poverty - . social rights and public policies in the xxist century . why a capability