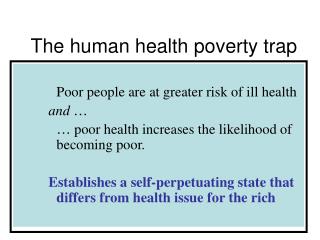 The human health poverty trap Poor people are at greater risk of ill health and … … poor health increases the likelihood of becoming poor. Establishes a self-perpetuating state that differs from health issue for the rich Is there a natural disaster-poverty trap?

The human health poverty trap - . poor people are at greater risk of ill health and … … poor health increases the

Human Development in the Context of Poverty - . myriads of mechanisms, a multitude of mysteries. what does it mean to be

The Tender Trap - . sex is not sin purpose of procreation planned for personal pleasure perceived as high/holy practiced

The Training Trap - . joe melton rci-safety. what is the trap?. we often re-train without proper incident investigation

What's the trap? - On-line wagering adventures have their very own unique social affair of issues, similarly as

THE MOUSE TRAP - . a mouse looked through the crack in the wall. . and saw the farmer and his wife open a package. . what