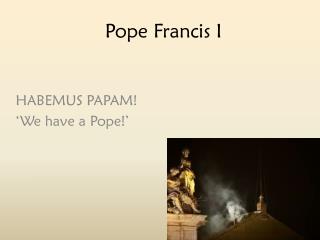 Pope Francis I. HABEMUS PAPAM! ‘We have a Pope!’. THE SON OF A RAILWAY WORKER. Pope Francis - the first Jesuit pope - has spent nearly his entire career at home in Argentina. Joan Pope - . goals of the cem. expand, update, and replace the spm practical and easy to use state-of-the-art technical

Pope Francis named Time magazine’s Person of the Year 2013 - Born in buenos aires, argentina, as the son of italian