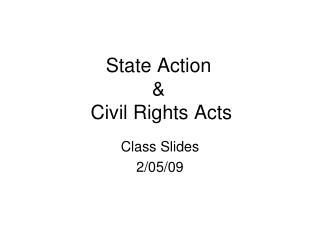 State Action & Civil Rights Acts. Class Slides 2/05/09. Shelly v. Kraemer (1948). FACTS: When Shelly, who was black, sought to purchase a house from its white owner, the neighbors went to court to enforce a "restrictive covenant" against the sale of the property to non-whites. ISSUE:

GANGTOK Slum Free City Plan of Action - . gangtok an introduction. the capital city of the state of sikkim largest city

Protecting Individual Liberties - . section 1 chapter 14. focus questions. what does the term due process mean? how is