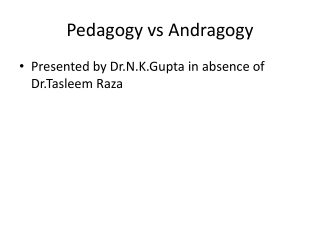 Why Do We Have to Care about Culture and Literacy in Language Pedagogy Class - . . goal of foreign language pedagogy

How do we use what we have learnt from assessment to improve our pedagogy? - . the southport state high experience mrs

THE PERCEPTION OF PROFESSIONAL AUTONOMY AMONG EDUCATORS OF ADULTS - . doc dr kristinka ovesni faculty of philosophy,

Hmmm….learning - ‘education is not preparation for life; education is life itself.’ (john dewey). home. younger.

Andragogy and the Principles of Adult Learning

Grade 3 Content in NGSS - . fundamentals and applications. pedagogy and

Web 2.0 &amp; Pedagogy - . the digital native “ those who grow up immersed in digital technologies, for whom a life