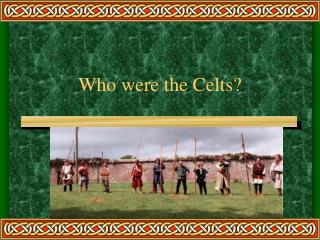 The Celts - . by meghna srivastava . in a celtic village. homes were mostly round with thatched roofs. walls were made

The Irish - . a brief history. celts. the celts are an ethnic group that share a similar culture. there are six celtic

THE CELTS - . by kayleigh and sarah . who were the celts . the celts came from central europe. around 500 bc , perhaps to

The Celts - . mrs. norberry. gaul before the

Samhaim or Halloween? - . where does halloween come from?. origins of halloween. celtic holiday samhain (sow-in)

British History - . the celts. who were the celts? from around 750 bc to 12 bc, the celts were the most powerful people

Ancient Celtic - . celtic homes. the celts lived in huts, and the celts in england lived in round houses. they had a

The Celts - . find out about. click here to enter. click this button to skip the rest of the instructions and go direct