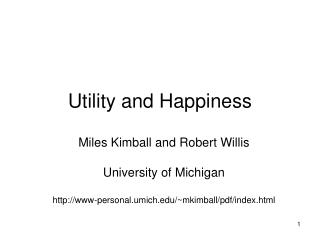 Utility and Happiness. Miles Kimball and Robert Willis University of Michigan http://www-personal.umich.edu/~mkimball/pdf/index.html. Two Meanings of “Happiness”. The Greatest Good for an Individual Feeling Happy. “Happiness,” as defined operationally by psychologists. Utility and Happiness - . miles kimball and robert willis university of michigan, may 2005. a growing economic

Interdependent Utility in Marriage: Evidence from Happiness Survey - . nattavudh powdthavee institute of education, u of

Utility and - . demand. definitions. marginal an extra unit utility the satisfaction gained from consuming a product or

Happiness and Society - . timo airaksinen. 1. happiness is a matter of presentation of the self in social life. people

Helping and Happiness - . altruism vs. prosocial behavior why do people help?

Health and Happiness - . blood diverted to the brain, heart, lungs and muscles, away from the digestive tract heart beat

information and happiness - . ian ruthven and various of his clever students university of strathclyde.

Love and Happiness - . vision. how can we make the world a more loving, happier place? please let me know! but, here are

Helping and Happiness - . prosocial behavior. any act performed with the goal of benefiting another person. is it

Total Utility and Marginal Utility - . what is utility?. utility of a consumer is a measure of the satisfaction the