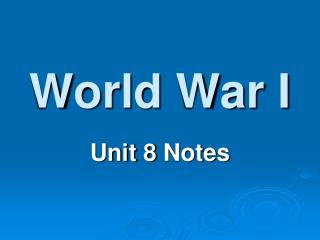 World War I. Unit 8 Notes. World War I Pre-Test. Communism was one of the leading causes of World War I. The United States was eager to support the war. The Allies and Central Powers were the two opposing forces in the war. World War I was the first war to use planes in warfare.