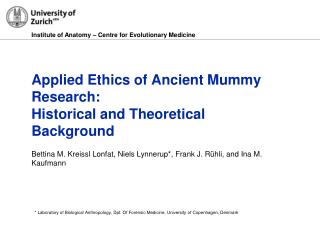 Theoretical and Applied Mechanics Program Northwestern University - . ranked no. 1 by the chronicle of higher

Ethics for Computer Forensics - . a consensus approach. thomas schwarz, s.j. with help from mark ravizza, s.j. and the

Ethics in Business Research - . what are research ethics?. ethics are norms or standards of behavior that guide moral